Al-Sadr moves the competition arena by “passing laws” in Parliament

Al-Sadr moves the competition arena by “passing laws” in Parliament 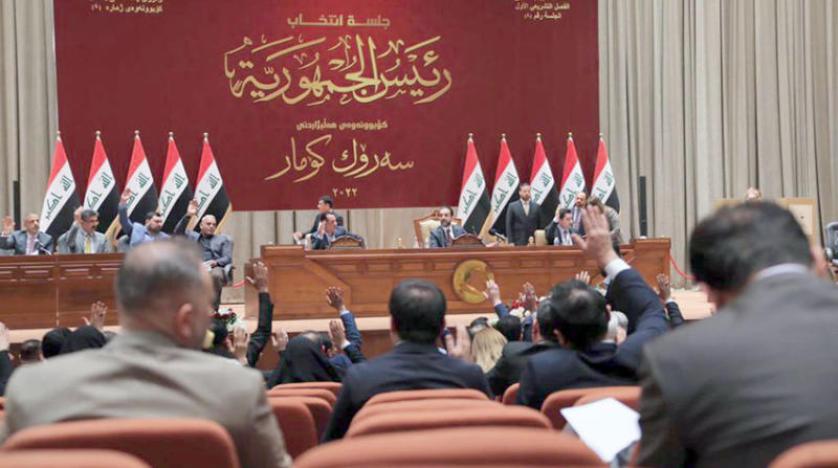 While the initiative of the independent representatives remained in place, both major Shiite forces (the Sadrist movement and the coordination framework) are not ready to concede to one another, despite the passage of 7 months since the parliamentary elections.

The political stalemate in the country continues, especially with the absence of any indications of a Kurdish-Kurdish rapprochement that could solve the knot of the post of President of the Republic.

In the meantime, the arena of competition between the two alliances moved from a search for a solution to the complex of the President of the Republic to Parliament. Al-Sadr, who gave his opponents in the Shiite house more than one deadline to form a government without him, began to act from within Parliament by passing the laws he wanted to pass.

More importantly, he forced his Shiite opponents to vote unanimously on the law criminalizing normalization with Israel on the grounds that it is not possible to stand against this law. Muqtada al-Sadr leads the tripartite alliance, while the coordination framework is led by a group of personalities, most notably Nuri al-Maliki, Hadi al-Amiri, Qais al-Khazali, Ammar al-Hakim and Haider al-Abadi.

But Al-Sadr, who was the owner of the idea and the project, performed a prayer of thanks after legislating the law, while his opponents, who gave him the opportunity of this victory, returned to quarrel with him over the position on the prime minister. The same applies to its ally, the Kurdistan Democratic Party led by Masoud Barzani, whose party’s deputies voted to criminalize the normalization law, despite the emergence of voices in Kurdistan to stand against this law, at least in terms of the fact that Iraq has legislated since 1969 a law prohibiting the promotion of Zionism, and therefore these voices see This law has nothing more than a political dimension.

Not only that, but the law of emergency support for food security has also turned into an arena of conflict and competition between the two Shiite blocs and their allies. Although the Federal Supreme Court overturned the draft law presented by Mustafa Al-Kazemi’s government to Parliament as an alternative to the draft budget that could not be submitted by a caretaker government, the Sadrist movement, which has the majority in Parliament, was able to submit it again to Parliament through another portal permitted by the constitution. It is a bill, not a bill.

And because al-Sadr has a comfortable majority in Parliament to pass laws that need only a simple majority (half plus one) or an absolute majority of the number of attendees in a full session of Parliament. And in the event that this law is legislated, which has become difficult to overturn by the federation because there is no constitutional basis for it, Al-Sadr will score a major victory for him over his opponents in the coordinating framework forces, since the government headed by Al-Kazemi is currently classified by the coordinating framework forces as close to Al-Sadr.

The dispute over this law between the Sadr and Tire blocs extends to what this law can provide of funds that the government can dispose of, especially if the law is passed with what the government provided in an amount of about 41 trillion Iraqi dinars (about 35 billion US dollars), while the coordination framework He believes that the actual need does not exceed 11 billion dollars. Regardless of whether this law is an alternative to the financial budget or not, it would prolong the political crisis that will put more pressure on the forces of the coordination framework, especially in light of the continuation of Al-Kazemi supported by Al-Sadr, which means that it will either have to Making concessions that al-Sadr is waiting for, or resorting to other ways to deal with the crisis, including riding the wave of the street that is already angry at the deterioration of services, especially electricity, which is the hot file every summer when the temperature starts to rise.

While al-Sadr formed, through his bloc, which topped the election results (75 deputies), the “Save the Nation” alliance that included the Sunni and Kurdistan Democratic “sovereignty”, the “coordinating framework” with its various forces and the multiplicity of its leaders, blocs and factions, was also able to form an alliance that included the On his side, the Patriotic Union of Kurdistan and the Sunni “Azm”. Both alliances have failed over the past months to form a new government at a time when Mustafa Al-Kazemi’s government, which is doing business, continues its responsibilities and authorities, except for signing agreements.

The node is represented in the majority coalition owned by al-Sadr calling for the formation of a national majority government, but he was unable to gather enough votes to elect a president of the republic, since the position of the president of the republic, according to the constitution, needs a two-thirds majority of parliament members, which means 220 votes out of a total of 329 votes. And because the two Kurdish parties must agree to choose one candidate for this position, which is customarily part of the Kurdish quota, the failure to reach consensus led to the violation of constitutional deadlines.