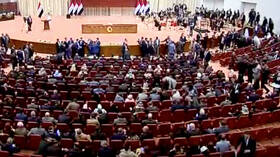 The source said to RT that “the leader of the Sadrist movement, Muqtada al-Sadr, who did not appear and did not send a representative during the meeting of the Shiite blocs, on Thursday evening, provided that there were no representatives of the State of Law coalition led by Nuri al-Maliki and the Asaib al-Haq movement led by Qais Khazali, in any meetings related to the fate of the next government, so that its representatives can attend”.

He pointed out that “the second meeting agreed on general principles on giving the green light to the commissioner, Adnan Al-Zarfi, to start forming his interim government.”